ESCWA was established in 1973 to stimulate economic activity in member countries, strengthen cooperation between them, and promote development.

Together, we work for a sustainable future for all. 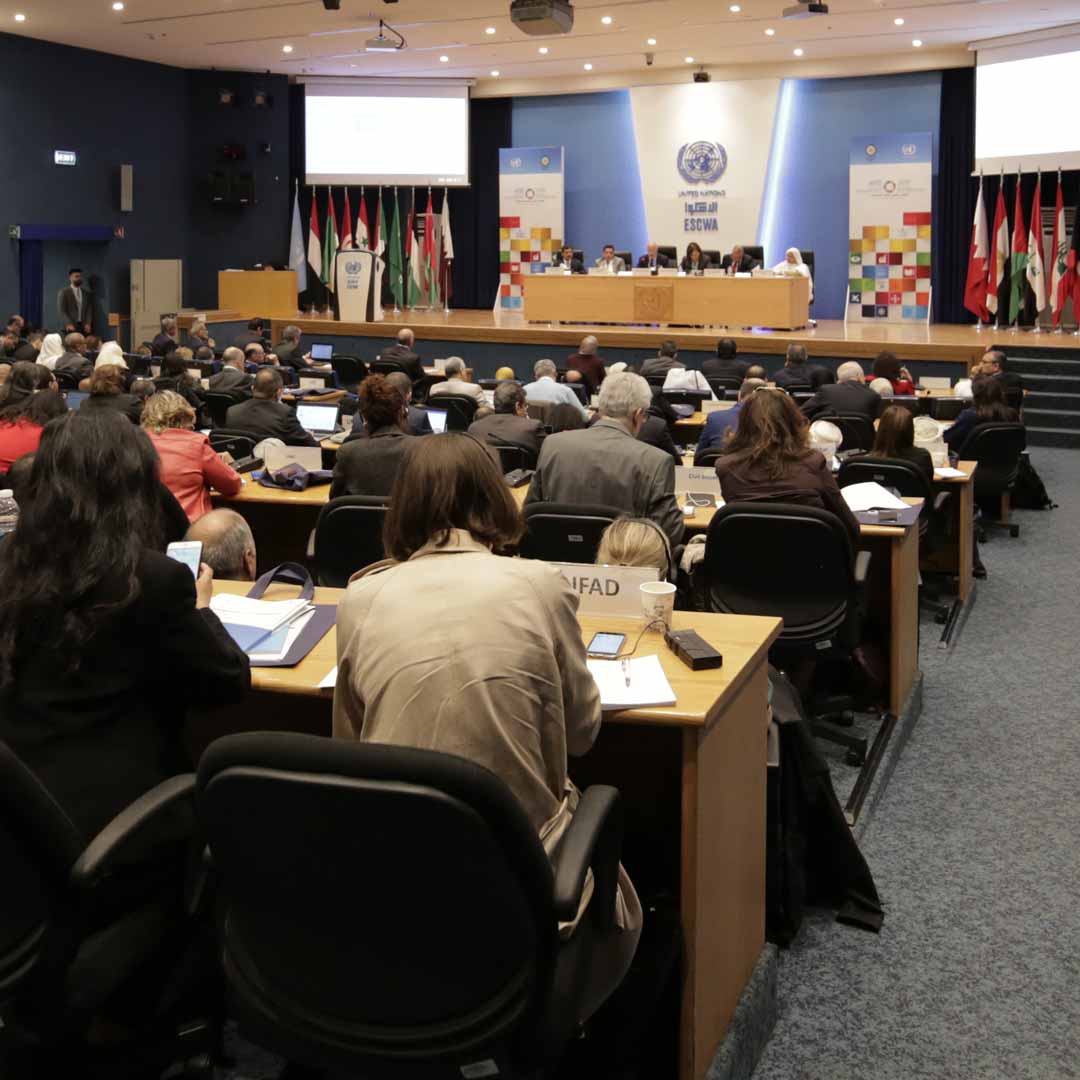 Stability and prosperity are key words of the United Nations Charter. They form the basis of sound and cordial relationships between countries, uniting them in their common goal towards a brighter future. This universal project is based on respect for the principle of equal rights for all, resulting in equality of opportunity to pursue a better standard of living through consistent economic growth, social prosperity and environmental sustainability.

The Economic and Social Commission for Western Asia (ESCWA) supports its 20 member States in their efforts to ensure prosperity and equality. By analysing regional and national economic, social and environmental trends in the light of global United Nations agendas, ESCWA provides Arab countries with policy recommendations that build on a thorough analysis of facts and commonalities. It also underscores the benefits of integration and creates regional public goods, including knowledge, data, tools and capacity. The shared language, culture and aspirations of the people of the Arab region form a solid foundation to tackle transboundary challenges through collective action at the national, regional and global levels. ESCWA is committed to supporting member States in optimizing their common strengths as they tackle shared weaknesses and challenges to create better opportunities for current generations and broader horizons for the future.

ESCWA is one of five United Nations regional commissions, which are located in Beirut, Addis Ababa, Bangkok, Geneva and Santiago. The commissions are unique intergovernmental platforms for advancing regional integration, developing regional norms and standards, exchanging experience and fostering cooperation. They play a critical role in promoting a holistic approach to development in their regions, and balancing the economic, social and environmental dimensions of sustainable development in their member States.

ESCWA leverages its convening power to promote dialogue and knowledge sharing at the national, regional and global levels, and to foster interregional cooperation and vibrant South-South partnerships. The implementation of global policy frameworks, chiefly the 2030 Agenda for Sustainable Development and its Sustainable Development Goals (SDGs), are among its top priorities.

ESCWA links development knowledge to policy through research and analysis. Its convening power brings together policymakers, researchers, experts and relevant stakeholders, thus serving as a forum for constructive dialogue and concerted action.

The voice of the region: bringing people together for deliberation, coordination, consensus-building and advocacy.

The think tank of the region: supporting quality data collection and analysis through innovative research for forward-looking, evidence-based policymaking

The adviser to the region: providing capacity-building and technical advisory services, and informing strategies and policies to strengthen national development efforts

The provider of support for the 2030 Agenda in the region: guiding member States in their efforts to implement the SDGs.

ESCWA works with the Governments and peoples of the Arab region to transform lives through the equitable and sustainable use of resources, integrated social development, inclusive growth, regional and sectoral integration, and gender equality in rights and obligations, so as to ensure the wellbeing of all.

ESCWA is the youngest of the five regional commissions. It was created on 9 August 1973 to represent the universal mandate of the United Nations at the level of the Arab region. ESCWA was initially located in Beirut (1974-1982), moved to Baghdad (1982-1991) and Amman (1991-1997), and subsequently returned to Beirut, its permanent headquarters.

ESCWA is part of the United Nations global vision for a peaceful and prosperous world where no one is left behind.

“We the peoples of the United Nations determined to promote social progress and better standards of life in larger freedom.”

– Charter of the United Nations, Preamble, 1945

“We, heads of State and Government, ... are committed to making the right to development a reality for everyone and to freeing the entire human race from want.”

“We pledge that no one will be left behind.”

Against this backdrop, the mandate of ESCWA has evolved over time. Having started as ECWA, dealing only with the economic dimension of development, it was renamed ESCWA in July 1985 in recognition of the social component of its work to reflect the multidimensional nature of the sustainable development effort. Environmental concerns have now also become part of the Commission’s mandate, allowing it to offer a full range of services through an integrated and multidisciplinary approach that reflects the universal needs of people and the planet.

ESCWA operates in a rich and diverse region in terms of national settings, natural endowments, institutional frameworks, social and economic profiles, development status and cultural features. it supports its 20 member States in an environment that is both challenging and promising. As a forward looking organization, guided by internationally agreed goals and supported by local political will and a sense of popular ownership, ESCWA strives for a better future for all through shared prosperity and dignified life.