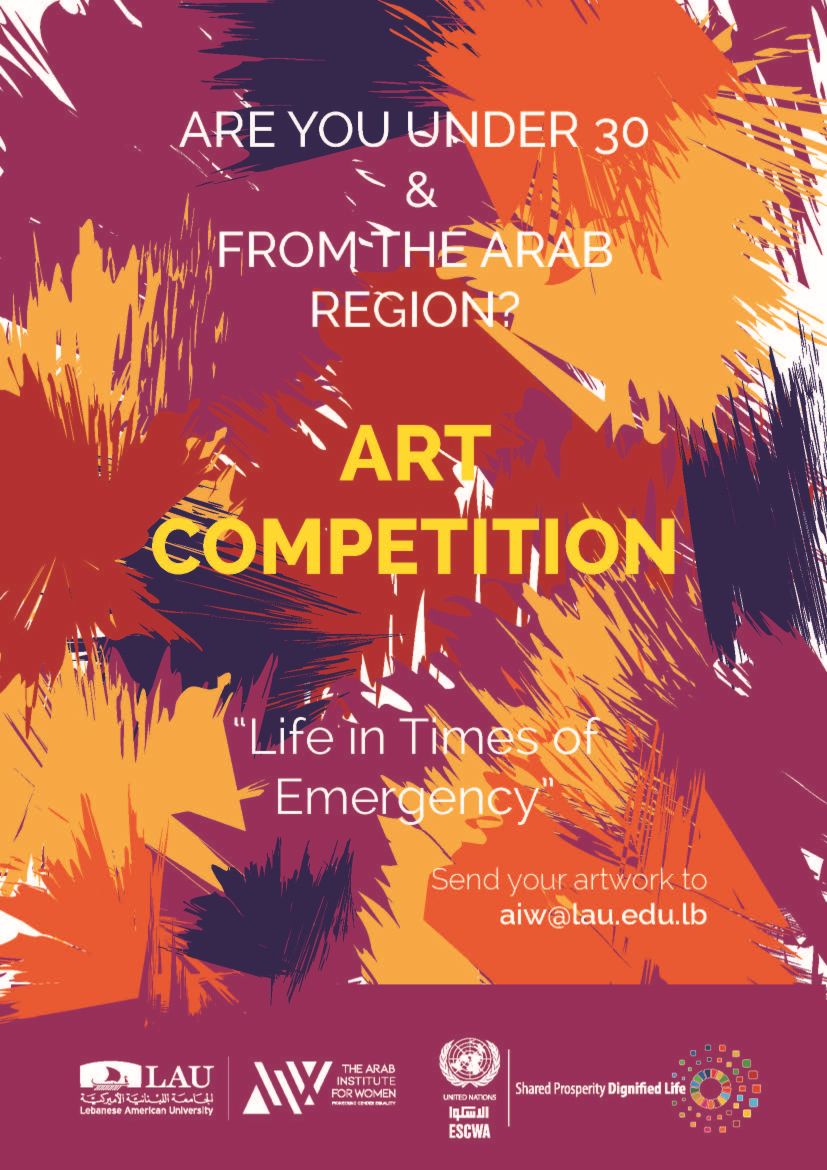 Marked annually from 25 November to 10 December, the 16 Days of Activism against Gender-based Violence is a campaign that serves as a time to raise awareness of and increase momentum towards ending violence against women and girls worldwide.

Each year, the United Nations Economic and Social Commission for Western Asia (ESCWA), in partnership with The Arab Institute for Women (AiW) at the Lebanese American University (LAU), marks the 16 Days of Activism with a social media campaign and regional youth arts competition centered around a chosen theme.

This year, ESCWA and AiW have chosen to focus on the impact of emergencies on women and girls for the campaign and the regional youth arts competition, with the theme of “Life in Times of Emergency.”

In the Arab region, the year 2020 has witnessed several types of emergencies, from the COVID-19 pandemic, to chronic conflict and occupation, to natural disasters, to toxic explosions. While the campaign focuses on gender-based violence, attention will also be given to the wider ramifications of emergencies on the health, socio-economic situation, safety, and political participation of women and girls.

The competition is open to all youth in the Arab region under the age of 30 and will run from 25 October to 27 November 2020. To allow people to express themselves and to raise their voices in their own way, the contest is open to all art forms. This includes painting, video, photography, poetry, music or and form of art the participants feel addresses this year’s theme.

To enter the arts competition:
Please send your artwork to aiw@lau.edu.lb along with the application, which can be found at:
https://docs.google.com/document/d/13ujdcXQmkkhM6TA1wK6Am3MGtQgQGYoeE8H1vlne8Nc/edit

Winners will be presented and showcased at a virtual event on Thursday, 10 December 2020. The virtual event will be preceded by a webinar with experts and activists discussing in greater detail the gendered impact of emergencies on the lives of women and girls in the Arab region.

About the 16 Days of Activism against Gender-based Violence
The 16 Days of Activism against Gender-based Violence (25 November to 10 December) is an annual campaign that serves as a time to raise awareness and increase momentum towards ending violence against women and girls worldwide.
Initiated in 1991, the campaign aimed to draw attention to violence against women as a human rights violation at a time when such violence was considered a private matter. Since this time, the campaign has gained international attention and observance, with several commemorative events occurring globally. The dates of the campaign are significant; 25 November is the International Day for the Elimination of Violence against Women, while 10 December is International Human Rights Days and the anniversary of the Universal Declaration of Human Rights.
In the framework of the annual campaign, United Nations partners are encouraged to host events with local, national, regional and global women’s movements, survivor advocates and women rights’ defenders, and create opportunities for dialogue between activists, policymakers and the public at large. The orange color is a key theme unifying all activities, with buildings and landmarks lit and decorated in orange to bring global attention to the initiative.

About the partnership between ESCWA and LAU
ESCWA and The Arab Institute for Women (AiW) at LAU have a sustained and active collaboration in research, conferences and campaigns, including the 16 Days of Activism against Gender-based Violence