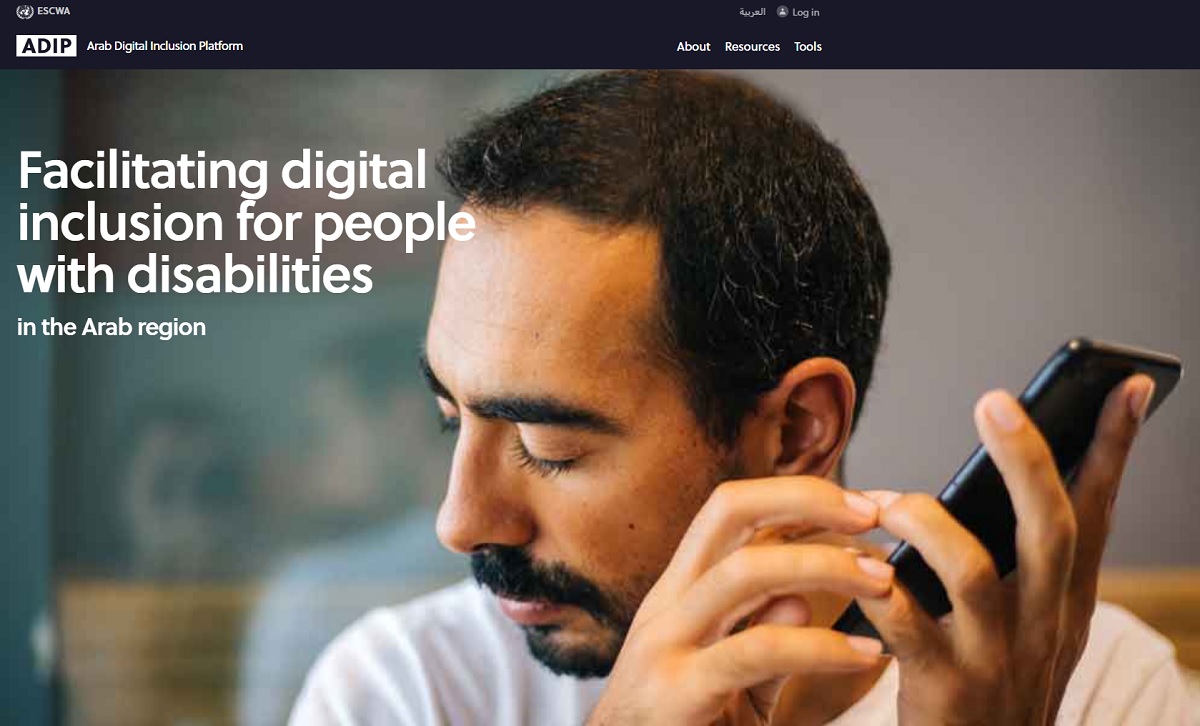 Although Arab countries are increasingly committed to realizing the rights of persons with disabilities, those in the Arab region are still among the most marginalized population groups, facing multiple barriers which hinder their ability to participate in society. Even though the information and communications technology sector in the Arab region has developed well over the last few years, the vital role that digital technologies can play for people’s empowerment and in promoting inclusive societies is still severely lagging.

In an effort to spur the development of e-Accessibility in the Arab region, ESCWA launched the Arab Digital Inclusion Platform (ADIP) project to support policymakers in the Arab counties to develop and improve their national policies and guidelines for enhanced e-Accessibility. The object of the meeting was to review the ADIP prototype, developed in 2020, with the Inter-sessional Expert Group on Disability (IEGD), to gain their feedback and suggestions for further development. Specific attention was given to reviewing the dedicated space created on the platform for IGED focal points.

Based on the meeting deliberations and discussions, several recommendations were proposed towards the improvements that should be included in the development of an advanced version of the platform, including:

Mr. Haidar Fraihat, gave a welcoming statement to the meeting participants. He mentioned that persons with disabilities are not a small segment in our society, and that any thinking or planning of development policies must take their needs into account, they cannot be ignored. Therefore, accurate statistics are necessary to achieve the goal of better integration and inclusion. Also, he added that inclusion consists of social inclusion and economic inclusion. And for this to be achieved, there should be an inclusion of knowledge especially in the twenty-first century, and the digital inclusion helps all individuals to use the information and communications technologies and to access to knowledge. Finally, he mentioned the financial inclusion which matters most; it is essential for persons with disabilities to integrate them into social and economic work. Then, he added that statistics for people with disabilities are important in development analyses in all United Nations organizations; these statistics should be taken from new sources such as electronic sources or administrative record sources. He stressed on the importance of the ESCWA Arab Digital Inclusion Platform (ADIP) in developing toolkits to help policymakers in the region promoting e-accessibility at their national level and thanked the efforts done in the project and especially in the tools made for policy makers.

Overview of current status of the ADIP project

Ms. Mirna El Hajj Barbar, Programme Management Officer and ADIP project coordinator, presented an overview of the project’s status, including its components, goals and upcoming activities. Ms. Mirna also talked about the project background and mandate. She overviewed the situation of disability and digital development in the Arab region and she stressed on the importance to enhance digital access capabilities throughout the region.

Ms Barbar showcased the project’s cumulative change approach, stressing the importance of three pillars, namely the situation analysis and evaluation, the development of key tools and products, defining and strengthening partnerships, and publishing products and policy proposals while working on their implementation and maximizing their benefits and impact. She concluded the overview by highlighting a list of upcoming activities, including the collaboration with the International Telecommunication Union to convene a regional conference on the "Accessible Arab Region", that would focus on extending digital inclusion to bridge the digital divide and afford all segments of society the benefits of information and communication technology.

Mr. Mohamad Nawar Alawa, Regional Adviser on Technology for Development, presented the ADIP prototype platform. He showcased the general features that included access to resources in a way that is suitable for everyone, compatibility with the most widely used screen reading tools, toolbar to enhance access to content (workaround), IGED expert group space, interactive tools for policies and technical guidance.

Focusing on the resources component of the ADIP online platform, Mr. Alawa explained how this section provides access to ESCWA publications on disability as well as the Member States Documents such as national policies, laws and regulations. It also provides access to accessible versions of  the content of these resources in Arabic and English, in addition to the filter and search features. Mr. Alawa showcased the interactive toolkits that was build to facilitate the use of the ESCWA e-accessability technical and policy templates by providing several scenarios ready to adapt. He mentioned that the ADIP Platform accessibility rate is currently 96 per cent, according to webaccessibility.com.

Overview of the IGED forum section

Ms. Sumaya Almajthoob, Associate Social Affairs Officer, presented the IGED Forum section, which was developed as part of the ADIP online platform. She focused on the main features provided under this section of the platform. ,She explained its structure and mentioned that this is a dedicated space created on the recommendation of the IGED group during a meeting in December 2019. The access to this private space is protected and can only be given through a user name and password that are provided to the IGED members. Members in this group can use this space to share news, events and draft documents. They can also use it to discuss an issues with regards to the status of people with disability and related focus areas. The forum will also function as an archive for the work of the IGED group.

Ms. Almajthoob viewed the forum properties stating that a username will be created for each country’s contact point, while the format of the forum remain flexible, and can be further developed through participants suggestions. The forum is available in Arabic and English.

The discussion and feedback session was moderated by Mr. Mohamad Nawar Alawa. Mr. Raafat Alzetawi, Jordan, thanked the organizers of the meeting and noted that the platform contains the necessary tools to help people with disabilities with easy access to information and added some remarks concerning the extent of the application of WCAG standards in the platform. He advised the addition of alternative texts for social media icons, such as WhatsApp, Facebook and Twitter, and to make the addition symbol (+) seen in the resources, accessible by adding alternative text. Mr. Alzetawi was pleased with the flags added above country names in the homepage and suggested the addition of the remaining countries with their appropriate flags. Furthermore, he advised to add a button to skip to main content on the start page to help going to the main content and skipping buttons and links that repeat in the page. Lastly he commented that not all documents are accessible, especially PDF documents. Mr. Mohamad Nawar Alawa thanked Mr. Alzetawi for all his recommendations and added that the team is careful in considering WCAG criteria. Ms. Mirna El Haj Barbar added that the resources are fully accessible; all the content of the resources was adapted and the team is currently exploring further tools using some technologies such as Artificial Intelligence and machine learning to improve this process. She also mentioned that WCAG standards were adopted carefully and localization especially on the Arabic language was done.

Mr. Turki Al Halabi, Saudi Arabia, thanked the organizers of the meeting and commented that the content creator should know about the technically comprehensive access standards. Mr. Alawa added that the team aims to train broad categories at the national level and that content creators will be a part of this training.

Mr. Khaled Hanafy, Egypt, thanked the organizers and introduced himself as the participant on behalf of Dr. Ashraf Marie, General Director of the National Council for people with disabilities in the Arab Republic of Egypt. Mr. Hanafy added that he was the first appointed deputy for people with disabilities in the history of the Egyptian parliament from 2015 to 2020. He suggested integrating special shortcut keys in the platform for quick access to key components, for example, when the user presses ALT1, they will return to the home page. Mr. Khaled proposed the inclusion of the Marrakesh VIP treaty document in the platform to be a reference for people with disabilities. Mr. Alawa thanked Mr. Hanafy for all his recommendations. Mr. Nawar also welcomed any other important documents for people with disabilities from all Arab countries to be included in the platform. Mr. Hasan Arous, ESCWA consultant, clarified that the feature of the special keyboard shortcuts is not yet integrated but will be in the next iteration. At the time of the meeting the user was able to use any external screen reader that already has the keyboard navigation keys feature. Ms. Mirna El Hajj Barbar added that the platform’s toolbar will not replace the assistive screen reader technologies. However, it is used so all the content can be reached via any device, whether it has a screen reader software or not.

Mr. Hamood Alshabibi, Oman, thanked the organizers and suggested to add sign language to the accessibility features noting that most people with hearing disabilities can’t read and rely on sign language. He also added that he wants to share with the team some documents from Oman so they can be included in the platform. Mr. Alshabibi proposed to add links of ministries and agencies concerned with people with disabilities to the platform so it can be comprehensive for everyone who wants to access the platform. Further, he advised to add the achievements of people with disabilities in the Arab region or the appropriate links dedicated to the countries. Finally, Mr. Alshabibi added that all suggestions will be sent to the ESCWA in a written communication for ease of reference. Mr. Mohamad Nawar Alawa thanked Mr. Alshabibi for all his recommendations. He added that, although, the team wants to work on sign language, they are facing an issue in finding a standardized Arabic sign language,  and they need to do more research about it. He also welcomed any documents from all countries to be added in the platform and the idea of adding links for ministries. Mr. Alshabibi added that there is a unified or standardized sign language in the Arab region. There are two dictionaries issued by the League of Arab States. ESCWA could collaborate with the technical secretariat of the League to resolve this issue.

Mr. Haidar Fraihat, ESCWA, thanked the organizers and proposed to add an indicators or data section in the platform that is related to SDGs. Ms. Mirna El Haj Barbar added that these indicators can be found on the ESCWA Data Portal. Therefore, all they need to do is to study the linkages between the portals in order to add the SDGs in ADIP platform.

Mr. Rowhi Abdat, United Arab Emirates, thanked the organizers and asked if some specifications have been taken into account for people with autism and learning difficulties, for example, to access this platform like others, such as removing distractions, changing the font. Mr. Hasan Arous, ESCWA, replied that there are currently three features, which are: increase text size, increase letter spacing, and highlight the links. He also added that the team is searching for different Arabic fonts for people with dyslexia. Furthermore, he noted that the ease of language has been considered as required. Mr. Mohamad Nawar Alawa thanked Mr. Abdat for his recommendations.

At the end of this session, Mr. Mohamad Nawar Alawa added that Mr. Rowhi Abadt and Mr. Hamood Alshabibi support the idea of adding a SDGs related section related to the platform. He also added that he was glad to receive all suggestions and other recommendations can be sent to the ESCWA team by email within one week. Ms. Mirna thanked all participants for their valuable recommendations and suggestions, and confirmed that ESCWA ADIP team will take them into consideration and will put all the necessary efforts to produce a better version of the platform. Mr. Haidar Fraihat closed the session.

List of all people participating in the online consultation

Minerals and raw materials in support of energy transition

Road safety data and policies in Lebanon, Qatar and Tunisia